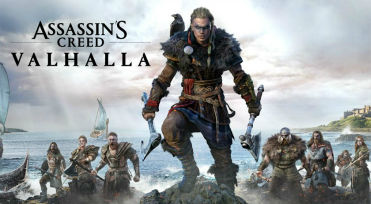 In Nordic mythology, "Valhalla" is the resting place of warriors who fell in battle. And the subtitle of the new "Assassin's Creed" adventure. What many had already suspected has now been officially confirmed: It is entering the Viking age.  The official "Ubisoft Forward" has now officially announced that "Assassin's Creed: Valhalla" will be released on November 17th, 2020 for PS4, Xbox One and PC. An exact date for PlayStation 5 and Xbox Series X is yet to be submitted!

The players in "Assassin's Creed Valhalla" take on the role of the feared Viking Eivor, "grew up with legends of battles and fame. In a thrilling Viking experience, they explore a mysterious but also beautiful open game world against the brutal backdrop of England in his darkest ages. Thanks to numerous new features, players are looting and pillaging, their settlement is growing and their political power is constantly expanding. "

The game is developed by Ubisoft Montreal and gives players the choice "to play a male or a female character. They also have a variety of customization options, such as the adaptation of hairstyles, tattoos, war paint and equipment. Every political alliance, decisions in The Battle and Dialogue option can affect the world of Assassin's Creed Valhalla, so players must act carefully to protect their clan's home and future. "

"Players will lead Eivor 's clan of Northmen, who were driven out of Norway by endless wars and dwindling resources in the ninth century AD, across the icy sea to the wealthy lands of England' s broken kingdoms, fighting for the future of their clan while learning the ruthless fighting style of the Vikings The combat system has been revised and now allows, among other things, the use of two weapons at the same time and also offers an unprecedented variety of enemy archetypes.From their longship, players can target locations to find riches and important resources When the Vikings begin to settle in their new homeland, they encounter resistance from the Anglo-Saxons and King Alfred the Great, who denounces the Northmen as unbelievers and wants to be the sole ruler of a civilized England Now do everything w is necessary to keep the chance of his place in Walhalla. "

The Gold Edition: Contains the main game and the Season Pass

The Limited Edition: is available exclusively from Amazon and contains the following digital content in addition to the main game: the Berserker settlement package, Hati-Wolf mount and a rune set

The Collector’s Edition: Contains the main game, the Season Pass, the Ultimate Package, a high-quality Ubicollectibles replica from Eivor and their Drakkar (height: 30 cm) in a Collector’s Case. In addition, an exclusive Steelbook? with unique artwork, a numbered certificate of authenticity and a Viking statue by Eivor with his raven and Danish ax (height: 5 cm). In addition, three exclusive lithographs and a selected soundtrack of the game. In any case, we can hardly wait to set off for the cold north. You get all important information about "Assassin's Creed: Valhalla" from us.