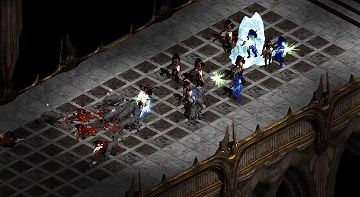 Diablo 2 + mods - this combination is perfect for people who are bored with standard gameplay. Mods for Diablo 2 let you enjoy a classic from 20 years ago again!

The original Diablo 2 has stood the test of time very well over the years. Although later the third part was created, the previous one still gained more favor from players. Despite this, the production from 2000 lacked amenities that would make the game more enjoyable (such as transferring items between characters, stacking runes and gems, or automatic gold collection). What's more, even for the most persistent fans, after reaching a high level and the best equipment, the game could get a bit boring. For this reason, many modifications have been made over the years. In this article, we will present popular combinations of the original version of Diablo 2 with mods.

Diablo 2 mods - what can mods change in the game?

Diablo 2 mods can affect both the gameplay and the audiovisual layer. The most popular of them make hack'n'slash, known for over twenty years, a completely different game. These are changes that affect literally every aspect of the production - from its appearance, through the story, to completely new mechanics. Why is it worth getting interested in mods for a game that is already 20 years old? Fans of the red stag series are impatiently waiting for the premiere of the latest, fourth installment of the series. However, the waiting time may be even longer. Players who have managed to complete Diablo 3 at least a few times so far, more and more often return to the previous parts of the cycle. It cannot be denied that the standard "two" (not the Resurrected version), and even less "one", no longer meet most game standards in 2022. Thanks to mods, you can adapt these classics to the needs of a modern player.

What's more, in September 2021, Blizzard released Diablo II: Resurrected, a refreshed version of the iconic title. The game is a complete remaster, which in addition to significantly rejuvenating the graphics, introduces important changes to the gameplay. Some fans have been waiting for its premiere with more commitment than for the upcoming fourth installment. The production gathered many positive reviews, but there is one big drawback that cannot be ignored - its price. The fee of about two hundred zlotys for the resurrected Diablo is a relatively large expense for the refreshed production from twenty years ago. There is also the question of players who already have the original version of the game. The purchase of Diablo 2, which, together with the Lords of Destruction expansion, costs about one hundred zlotys, does not entitle you to transfer the saves to Diablo II: Resurrected. Troublemakers of the legendary hack'n'slash do not want to part with their characters. To avoid this, and at the same time enjoy the eyes with better graphics or new mechanics, players reach for modifications. Which Diablo 2 mods are most often chosen by fans of the series?

The most popular mods for the original version of Diablo 2

The best Diablo 2 mods are distinguished by originality, size or build quality. The most popular of them are usually modifications that significantly change the appearance and gameplay. However, the list will also include smaller modifications that only improve the failing elements of the game.

The most popular and the biggest mod for Diablo 2 - Median XL. The first work on the modification took place in 2003, but was completed by an unrepairable bug. After a series of changes to the structure, adding a lot of elements, and fixing a few bugs, the Median XL came into the hands of Diablo 2 fans in 2008. The author, however, was not fully satisfied with his work, and four years after its premiere, he started working on the Median XL Sigma, which was released in 2019. On August 27, 2021, the eyes of the players saw the latest update called Median XL 2.0. What news does it introduce?

Median XL 2.0 is primarily a lot of new skills, character development trees and a huge pool of items and more possibilities for their creation. In addition, the mod changes the models of monsters in all acts and introduces the so-called endgame. The add-on allows you to enjoy the game even after it ends. Moreover, to facilitate this process, after completing the quest "Lair of Evil" and reaching level 50 of each character, you can reallocate all skill points and select attributes again. Additionally, Median XL introduced many improvements, both in quests and in minor issues (e.g. item descriptions). In fact, the only element that the modification has not changed is the plot of the game, which is a very big plus for old school players.

The modification in its original form is unfortunately in English, but thanks to the work of Polish modders, it can be easily changed. Median XL Crack can be downloaded for free from the official production forum. Virtually all mod elements except the names of the items have been translated. Unfortunately, we will not see in it often ridiculed, abstract names of items, such as the Elite Legendary Mallet with the power of Stone Crushing.

When turning on the original Diablo 2, most players encounter the classic problem of older games - definitely too low resolution. The mods that increase it don't add as much content as the other mods we've mentioned, but they can't be said to be any less important or less polished in any way. Many mods allow you to beautify the gameplay in all patches except 1.14. After entering "diablo 2 1.14d hd mod" in the search engine, you can find many user entries about the inability to play HD. However, if you don't mind playing older versions of the game, check out mods such as D2HD or D2MultiRes.

Project Diablo 2 is the second, next to the Median project, a very large modification to Diablo 2. PD2, however, focuses much more on the online aspects of the game. Added to the core game are new skills, an endgame with new maps and dungeons, a global leaderboard of top players, and a better item balance. What's more, PD2 introduces a seasonal system, i.e. restarting the game every four months. Thanks to this solution, you can enjoy the good state of the internal economy all the time and make a fresh start in the race for the title of the best player.

The Hordes of Chaos

The Hordes of Chaos rotates Diablo 2 gameplay 180 degrees. Everything changes: plot, monsters, quests, items and much more. Particular attention should be paid to a script that in no way resembles the original. First of all, in The Hordes of Chaos, our character will face the title hordes of goblins attacking humanity. Similar to the classic Diablo 2, the game is divided into five acts. In order to move to the next stage of the game, you usually have to defeat the boss that ends the chapter. This modification will delight anyone who has already been fed up with the plot of the original.

Path of Diablo is nothing more than a combination of the best elements of the iconic hack'n'slash with its current greatest rival - Path of Exile. The mod introduces skills known from PoE to the game and improves some mechanics that are broken in D2. This combination was created for obvious reasons - the Diablo 2 climate is not to be found in any other production. However, as we have mentioned several times, some aspects of the gameplay require a refresh or a complete overhaul. Path of Diablo works great in both cases, providing players with an unprecedented experience.

Are there any mods for Diablo II Resurrected?

The premiere of Diablo II: Resurrected took place relatively recently, but it did not stop the moderators in any way. At the moment, you can already find some really interesting mods on the Internet. Unfortunately, most of the most popular modifications from the original two are unlikely to appear in the renewed version. Where do you get that confidence? Many creators responsible for mods such as Median XL or Project Diablo 2 spoke very negatively about the chances of transferring their creations to the new engine. The enormous amount of work put into creating them on the old platform would then be wasted, and for obvious reasons it is not in their interest. Moreover, many of the changes made by these mods have already been implemented in the base version of Diablo II: Resurrected. So it would be pointless to put them into practice again.

Finally, by the way，if you need d2r ladder items, please buy them from MMOexp.