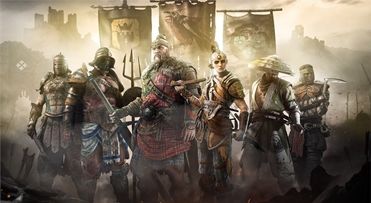 There is an article about the former creative director of the "Dragon Age" series "Mike Laidlaw" who came to Ubisoft and proposed a project code-named "Avalon". This is a medieval fantasy RPG game with King Arthur and the Knights of the Round Table as the protagonists . It's a pity: his proposal was not approved by the chief creative director "Serge Hascoet".

Presumably, many players who like medieval themes will feel sorry after seeing the above news. When it comes to medieval themes, we often think of knight culture and classic castle buildings, which are very attractive to some players. Although it is a pity that "Avalon" failed to meet the players, there are still some good medieval-themed games on the market.

"For Honor" is an action game based on ancient warriors developed by Ubisoft Montreal Studio. Players will play the roles of knights, Vikings, samurai, etc. in the game. We don't look at the background of the times of Vikings and samurai, but mainly look at the knight camp to know that the game uses a lot of medieval elements. Whether it's the buildings or scenes in the game, you can actually see that "For Honor" uses a medieval art style.

The background of "A Plague Tale: Innocence" is France where the Black Death broke out in 1394, and it is also the time of the second most famous Black Death pandemic in human history. Although the game is only about 10 hours long, its excellent art and script have won praise from many players.

"Conqueror's Blade" is a massively multiplayer online real-time tactical game developed by Booming Games, officially launched in 2019. In the game, each player will act as a general and deploy various arms on the battlefield to cooperate with each other to fight, which can be regarded as a very realistic medieval battlefield simulation style game work. The game itself uses a war-like gameplay with a sandbox. The background design spans the entire Eurasian continent and is worth playing.

The multiplayer battle game "Mordhau" developed by the independent studio Triternion became a dark horse after it was launched on Steam in May last year. Its sales in the first week exceeded 500,000 and the number of online users was 60,000, ranking first on the bestseller list. The game background is set in the Middle Ages. The cold weapon battles in the Middle Ages include not only stimulating and bloody close-range hand-to-hand combat, but also long-range battles with slings and other equipment, which you can experience in "Mordhau".

On the whole, games with the Middle Ages as the theme are not rare, although they are not mainstream, they are also common adaptations. In medieval themed games, we often see castles, knights, cold weapons, manor cultural elements and so on. Are you interested in this type of game? Come here to learn more！