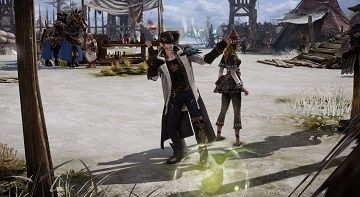 Lost Ark's prisons are serious stuff, being the game's features for some. Between the shocking visuals, the crowds of junk hordes to kill, and the tomfoolery (and generally, testing) supervisor battles, what's not to cherish?

Indeed, even with that large number of positive angles going for the prisons, the way that they additionally have Mokoko Seeds concealed all through them likewise makes them all the seriously alluring (and maybe gives you motivation to return to the prison subsequent to beating it). There are ten seeds concealed in the last and climactic prison of the North Vern story, Ancient Elveria. Remember that this prison is the principal Abyssal Dungeon, an incredible week after week action to do while in level 1 final stage content.

You can get the principal seed toward the beginning of the prison before you even beginning the in-prison story by conversing with Thar. It's situated close to a heap of wooden flotsam and jetsam and several dead bodies.

This seed is likewise the main seed situated in the initial segment of the prison (Sanctuary Entrance), so when you get it, don't stress over observing the following one until Garum smacks you and Thar through a divider (in a cutscene) and into the following region.

The subsequent seed is quite simple to waltz past and miss, for all intents and purposes in the room you are thumped into by Garum post-cutscene (start of the prison's subsequent region: Sacred Corridor). Particularly assuming no doubt about it to skirt the cutscene, you're likely attempting to hold onto control of your personality straightaway and stroll forward, abandoning it. In this way, when Garum slaps you through the divider, remember to stroll down to the wrecked structure's edge.

Additionally, assuming that you carry on to where Thar cuts Garum and they dampen the scaffold as they fall, you can't get back once you get around the gap, so assuming you miss the second or first seeds, you'll need to run the prison again to get to them.

The third seed is more in the open than the others, as it's situated at the foundation of one of the sections along the pathway. You'll find it a couple of steps from you in the wake of bouncing across the wrecked scaffold (that Thar and Garum break after falling).

An enormous section darkens the fourth and fifth seeds. On the off chance that you walk near it, said section will dephase, permitting you to see the two seeds, which are very near each other. These are in the room with the three sorcerers that continue to produce undead until you kill them, so make a point to get them out prior to getting these two seeds.

Now, it's worth focusing on that to interface with the third piece of the 6th secret story of North Vern's Adventurer's Tome, do as such prior to putting on the warlock's camouflage. In the event that you do, you'll lose your advancement in the secret story and need to return and associate with the initial two pieces once more.

The 6th seed isn't especially interesting, as it is found behind the door (on the right) that prompts the Gatekeeper Ningath battle, however to effectively recover seeds seven and eight after this, there is one thing you really want to do as you would prefer to seed six. Whenever you're masked, after going into the custom room, you are given the choice to eliminate your camouflage and upset the custom, or overlook the custom and penetrate. You really should overlook the custom and leave the room through the swinging doors without killing any of the warlocks.

When you arrive at the entryway, stand in the featured designated spot box to advance the story, and the game will eliminate your mask for you. In the wake of recovering the 6th Mokoko seed, continue onward and rout Gatekeeper Ningath. Once done, don't jump on the lift and go on in the prison, since you must back-follow a piece to get Mokoko seeds seven and eight.

In the wake of recovering the 6th Mokoko seed in the manager battle area of Gatekeeper Ningath (and killing him), now is the right time to work your direction back through the Contaminated Ruins (go ahead and kill the High Necromancer in the custom room, he's not required alive now). Hold going the entire way to its end, by the wrecked sculpture with no lower body, as displayed in the image above.

That is a secret entry; just stroll through the divider, going off-map and into the haziness, to get the following two seeds. They're close to one another and simple to see against the completely dark ground.

The 10th seed is found in the last portion of land in the prison, Sigmund's Laboratory. It is in the passage going before the last room where you battle Sigmund himself. It's not difficult to pass this seed by in the midst of all the undead junk crowds, so whenever you've killed them off (and ideally prior to drawing in Sigmund), go get the seed on the right half of the corridor.

The 10th and last seed is found in the absolute last room of the prison, where you battle Garum (once more) and Sigmund. You can't get the seed before the supervisor battle, since after the cutscene that sees you stroll into the room you're promptly in battle with Garum. Thus, when you rout Sigmund, don't promptly utilize your Song of Escape to leave the prison, and remember to get the last seed after the supervisor battle!

To have the best experience in the game, some players consider using MMOexp to buy Lost Ark Gold.