Why "assassin's creed valhalla" make everyone look forward to? 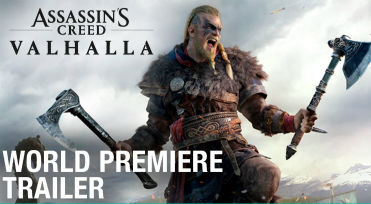 Sure enough, it is the background of Nordic mythology. Ubisoft announced “assassin's creed valhalla” through live broadcast, telling Ubisoft to release the new work of "Assassin's Creed" in a very novel way. The official chose to cooperate with the artist "Bosslogic" to let "Bosslogic" paint on the spot and draw the cover of the game. After eight hours of painting, we know: The background of the new work of "Assassin's Creed" should be the Viking era!

The official name of this new work is "assassin's creed valhalla", not the Viking Age. This is a literal translation. "Valhalla" is the hall of the Nordic mythology and the god of death, Odin, who received the heroic spirit. The Nordic mythology is derived from the belief of the Vikings. After the cover was made public, Ubisoft released the first trailer for "assassin's creed valhalla" on April 30!

This nearly four-minute trailer has brought a lot of news to everyone. This new work of "Assassin's Creed" has aroused strong interest from players. So what's unique about this new work after "Assassin's Creed Odyssey"? From the ancient Greek battlefield to the Viking era, what is new in the game? Let's see.

"Assassin's creed valhalla" will be launched at the end of 2020, and the sale platform covers PC (Epic Game Store, Ubisoft Store) platforms PS4, Xbox One, PS5, Xbox Series X, etc. The fact that the game will land on the next-generation console is very attractive, and it is estimated from the time that "assassin's creed valhalla" will be the first game on the next-generation console (PS5, Xbox Series X). Unfortunately: everyone has seen that there is no Steam platform.

"Valhalla" is based on the Viking era in the eighth to eleventh centuries of history. Players have become members of the Viking marauder Evor, participating in the dark age of the legendary invasion of England. The Evor tribe, originally settled in Norway, was forced to leave their homes due to endless wars and lack of resources, straddling the frozen North Sea and arriving in the turbulent Kingdom of England. The main theme of the game is looting and development, especially classic naval battles, full of elements that excite players!

In the trailer, we can see that Sword Sword is definitely returning. The Viking Berserker using Sword Sword is still quite curious. At the same time, we can also see warriors use axe throwing and other combat actions. This time, "Assassin's Creed" should be able to hold one weapon in each hand. The redesigned combat system is exciting. Unfortunately: "Assassin" in "Assassin's Creed" hasn't appeared in a long time!

In terms of features, the official claims that the player's strength, influence and choice will have an impact on the world. Players can choose Avalor's "male" or "female" characters to play, and these characters can customize the image, including hair, tattoos, painting and equipment.

According to official sources, "assassin's creed valhalla" was developed and produced by the Montreal studio that was once responsible for "Assassin's Creed IV: Black Flag" and "Assassin's Creed: Origins". In addition, most of Ubisoft's studios around the world participated in this project. It can be said that Ubisoft has devoted all its resources to this next-generation masterpiece, making people look forward to it.

The above five points make "assassin's creed valhalla" attractive to players. let us wait and see! What are your thoughts on this? Welcome to leave a message!